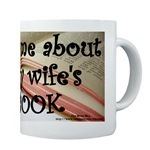 Ask me about my wife's book. At The WRITE Way, Gifts and Promotion Products for writers. 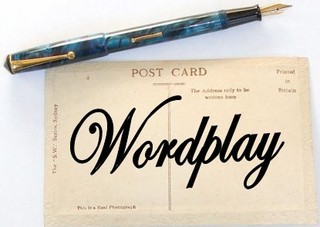 "I can't write five words but that I change seven."

There's no fool like an April Fool. No that doesn't sound right, does it? Yet, April starts with All Fool's Day which, I guess, is appropriate considering April 15 is the traditional day here in the United States to pay income tax. Now that's an occasion that tends to make one feel slightly foolish and dense too at times.

This edition of Wordplay contains some birthday advice. You all have one this year. Since January, we've already celebrated several birthdays among family and friends. Celebrate is the operative word. None of this "hating your birthday" crap that too many women obsess over. Be thrilled if you're lucky enough to have a birthday. Some people, sadly, won't. I mean, any day that includes a frosted layer cake, or whatever sweet you desire, has to be a good day.

I always admired the wit of the late George Carlin. I also enjoy his wisdom. I've combined my comments--or wisdom, what there is of it--with some advice from Mr. Carlin. Enjoy.

HOW TO STAY YOUNG
by George Carlin

1. Throw out nonessential numbers. This includes age, weight and height. Let the doctor worry about them. That is why you pay him/her.

Yep. I honor this resolution. Life is too fragile and short (If you've lost a loved one way before their time then you know what I mean.) to worry about jumping on the scale every morning or regretting that you're not tall and built like a Victoria's Secret model.

2. Keep only cheerful friends. The grouches pull you down.

I found my attitude reflects those I hang with so I try to stay away from people who bring me down. You know, those black holes of the universe who just suck the life right out of you.

3. Keep learning. Learn more about the computer, crafts, gardening,
whatever. Never let the brain idle. "An idle mind is the devil's workshop."
And the devil's name is Alzheimer.

I listened to my grandfather who said, "Learn something new every day."

Long ago when I was young and poor, I learned the pleasures of conversation, good books, laughter, and relationships. There's little that can beat those things for enjoyment.

5. Laugh often, long and loud. Laugh until you gasp for breath.

Laughter isn't just the best medicine; it makes medicine uncalled for. Give me a funny movie or book any day. I don't pay hard-earned money for angst, moving, and dramatic with unhappy endings.

6. The tears happen. Endure, grieve, and move on. The only person who is with us our entire life, is ourselves. Be alive while you are alive.

Life is an unending series of changes. Some are good. Savor them. Some are bad. Suck it up and get through them. Learn how to be the person who can live through the successes and joy without being smug and survive the bad without falling apart. I learned a few years ago that I am far stronger than I ever knew.

7. Surround yourself with what you love, whether it's family, pets, keepsakes, music, plants, hobbies, whatever. Your home is your refuge.

I made a sign for the first home I, alone, bought and hung it on the gate. Sanctuary. That's what it was for me. Every home I've lived in since has been the same. Sanctuary.

After years of physical fragility, I finally am improving. I learned that sometimes you have to keep moving through the pain no matter how bad it hurts. Your cells either decay and die or they live strong. It was hard, but like I said, I'm stronger and have greater will power than I ever thought. I made the conscious decision to not accept an unhealthy future. Then I proceeded to fake it while I tried to make it true.

9. Don't take guilt trips. Take a trip to the mall, to the next county, to a foreign country, but not to where the guilt is.

Guilt in very small doses serves to make us behave better, act better, perhaps try harder. The problem is that most people don't have small doses. They have huge, honking burdens of guilt that they carry around or worse that they try to dump on other people whom they are supposed to love. Down with guilt. Up with reasoned thought and behavior that make you do the right thing at the right time.

10. Tell the people you love that you love them, at every opportunity.

There's an old country music song my dad used to listen to. "For Tomorrow Will Never Come." Probably sung by the original Hank Williams or Jimmy Rodgers. Life is short and has never offered a promise to anyone that tomorrow will arrive on schedule. Each day, people get killed in too many ways to recount. Never assume that you can make up tomorrow after a fight today or that you can say you're sorry for hurting someone. Live as if each day is your last because it could be. Or the last day of someone you love.

Life is not measured by the number of breaths we take, but by the moments that take our breath away.

Keep track of those moments. Write them down so when you're old and can't dance with your party pants on, you can read about those breathtaking moments. Your kids will really get a kick out of realizing what you were like as a PERSON not as a frazzled mother or a stern father. One of these days you might have grandkids who just might be able to see you as the daring guy who bought an airplane and learned to fly or as the cool chick who signed up for karate when she turned forty instead of as the gray, stooped elders in their lives.

If you don't send this to at least 8 people, who cares?

Indeed, why should you waste time doing useless, insignificant things. Cut out the time-wasters from your world. Streamline your lives. Remember what Thoreau said? "The world is too much with us. Simplify."

WORDPLAY
Brought to you By:
OLD ENOUGH TO KNOW BETTER
Reduced price for April in honor of hard-working tax payers!

Every woman makes mistakes. Meet Stormy Clarkson, haunted by the three whoppers she made that changed her life forever. Stormy is on the brink of turning fifty, and she's crushing on a younger man--totally gorgeous, sexy Sean Butler, owner of Sierra Verde Winery. Sean's been after her for six months, but she's resisted every advance. She can't risk another mistake, and Sean scares her because of the way he makes her feel.

Then, one night he kisses her. She can't forget his kiss.

Stormy learned some hard lessons from the men who wanted her for her face and her body, but not for herself. Armed with iron self-control and the desire never to risk her heart, she's determined to deny what she feels for Sean.

Sean Butler was once an interrogator for the U.S. Army. He knows a lie when he hears one, and that's all he hears in Stormy's icy refusals. Sean's smart enough to know that the only way to deal with a control freak is to make her lose control. He has a plan to do just that. The beautiful blonde had better be on her guard because he's prepared to do whatever it takes.

Available wherever ebooks are sold. For Buy Links, visit The Good, The Bad, and The Girly. Thank you!